Angular vs React – Which is The Best JavaScript Framework in 2018?

As one of the most dynamic and efficient front-end JavaScript libraries for UI, React.JS has been the go-to framework for the majority of developers. It’s relatively more difficult to learn, but the flexibility and efficiency make it fun and efficient to deploy. What are the chances that React.JSis to become the most dominant force in 2018, given the presence of another stellar JavaScript framework, Angular.JS, in the market today?

Angular.JS is another very functional framework when it comes to app development. It’s one of the most suitable frameworks for app development targeted at users with browsers older than IE8, with an immense capacity to boost performance and render support for the server-side of such apps.

This article takes an in-depth look at the comparison between React and Angular. First, let’s go over both options.

React is the logic-less View ‘V’ files controlled by a ‘Controller’ in the Model View Controller (MVC) model. Rather than replace the view, React only assembles reusable components (sortable tables and pop up modals, for instance) in order to make it more modular. In effect, Java development services can create intricate interactive web applications by using react to create page components and can be altered without the need to reload the page entirely.

Today, more than a quarter of programming job posts focus on React.JS, while Angular.JS developers are third in the line, next to jQuery developers, on the list of the most sought-after JavaScript developers.

Aptness to Product Based and Service Based Brands:

Angular.JS developers get to work with a framework that offers a wide array of custom-made configurations which allows for minimal configuration and speedy development periods. Hence, Angular.JS is quite apt to service-based brands.

On the other hand, React is component-oriented and deploys core JavaScript. It’s also contingent on clear-cut principles like the principle of “Write Once, Run Anywhere.” This relatively greater inclination to page components makes React the better of the two when it comes to the scope of work for app development for product-based brands.

In essence, an excellent AngularJS development company is better-suited to handle app development for service-based brands, while React.JS developers are better suited at handling app developments for product-based companies. 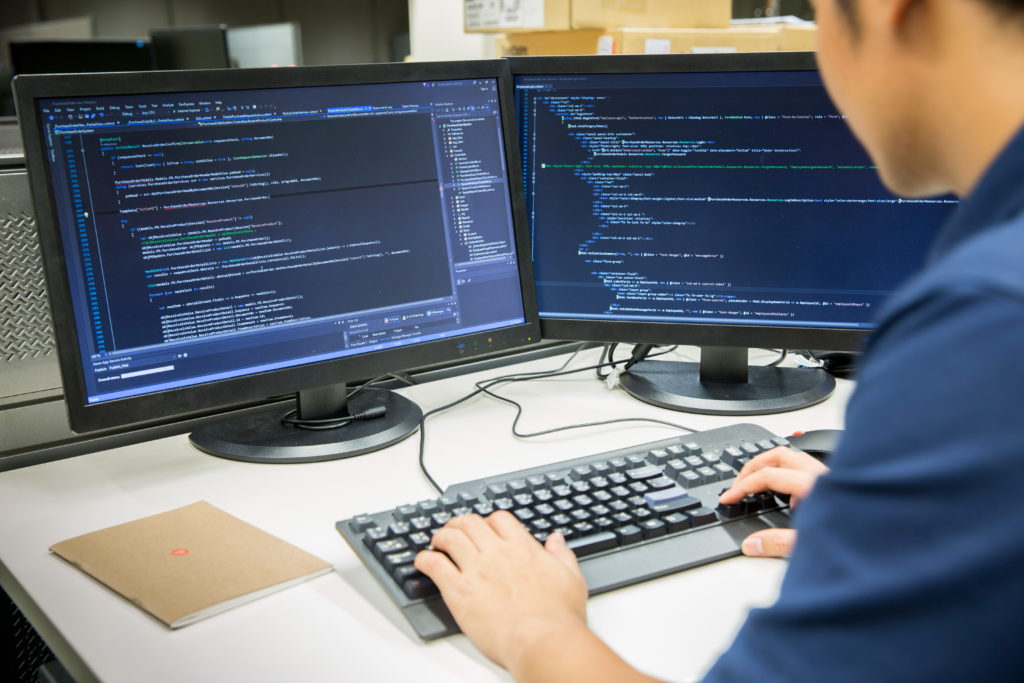 When considering the performance of Angular, two major factors hold sway. First is the two-way data binding pattern used by Angular 1.x and higher versions. This process, also known as “dirty checking” can actually drag down the processing speed of an Angular.JS app development.

Angular.JS tracks changes in the DOM of every value bound to modules in HTML by using watchers. The greater the number of watchers in action, the greater the performance lags in the app development. The second factor is the way in which Angular.JS applies changes to the real DOM in the browser.

Since the browser will have to alter a number of values in reaction to the changes in the DOM enacted by the framework in the browser, the app’s performance might take a dip. To eliminate these performance setbacks, the latest versions of Angular.JS allow AngularJS developers to deploy a framework which operates with one-way data binding and server-side rendering.

On the other hand, React changes program state with relatively minimal effects on the browser. It uses virtual DOM, which allows for the tracking of values and changing the HTML on the server-side, without with the involvement of the browser. In effect, it only applies changes to specific elements of the HTML on browsers, instead of applying a completely new HTML to the browser. This makes React a more efficient framework than Angular.

Angular.JS coding is akin to assembly code, which is generally considered to be quite rigid. To achieve faster load time in app development, Java development services opt to load the components that have the lowest demand and then proceed to load according to the level of demands.

This also allows for the development of additional features without detracting from the load time. But Angular’s assembly code nature does not facilitate this expedient strategy. However, by using React’s require.js and webpack, React.JS developers can easily incorporate new lines of code without causing lags in load times.

Data binding is the process with which data is synchronized between model and view components. An Angular.JS development company needs to determine whether the most effective data flow in an MVC pattern is a uni-directional or bi-directional flow.

Angular allows for automatic synchronization of data between the model and view components through a data binding pattern that handles the model as the only source of truth in the application.

In effect, Angular syncs data from Model to View and vice-versa in a way that allows for any changes in any model or view to reflect in the other end. However, React utilizes a one-way directional flow. It uses Virtual-DOM to infuse data into the rendered view either at a time when the root view or nested view is created. The data flow can be assessed through the props property of a particular context.

Development Differences between a Web Portal and a Website

How do You Keep Control of Your Outsourced Software Development? Part 1